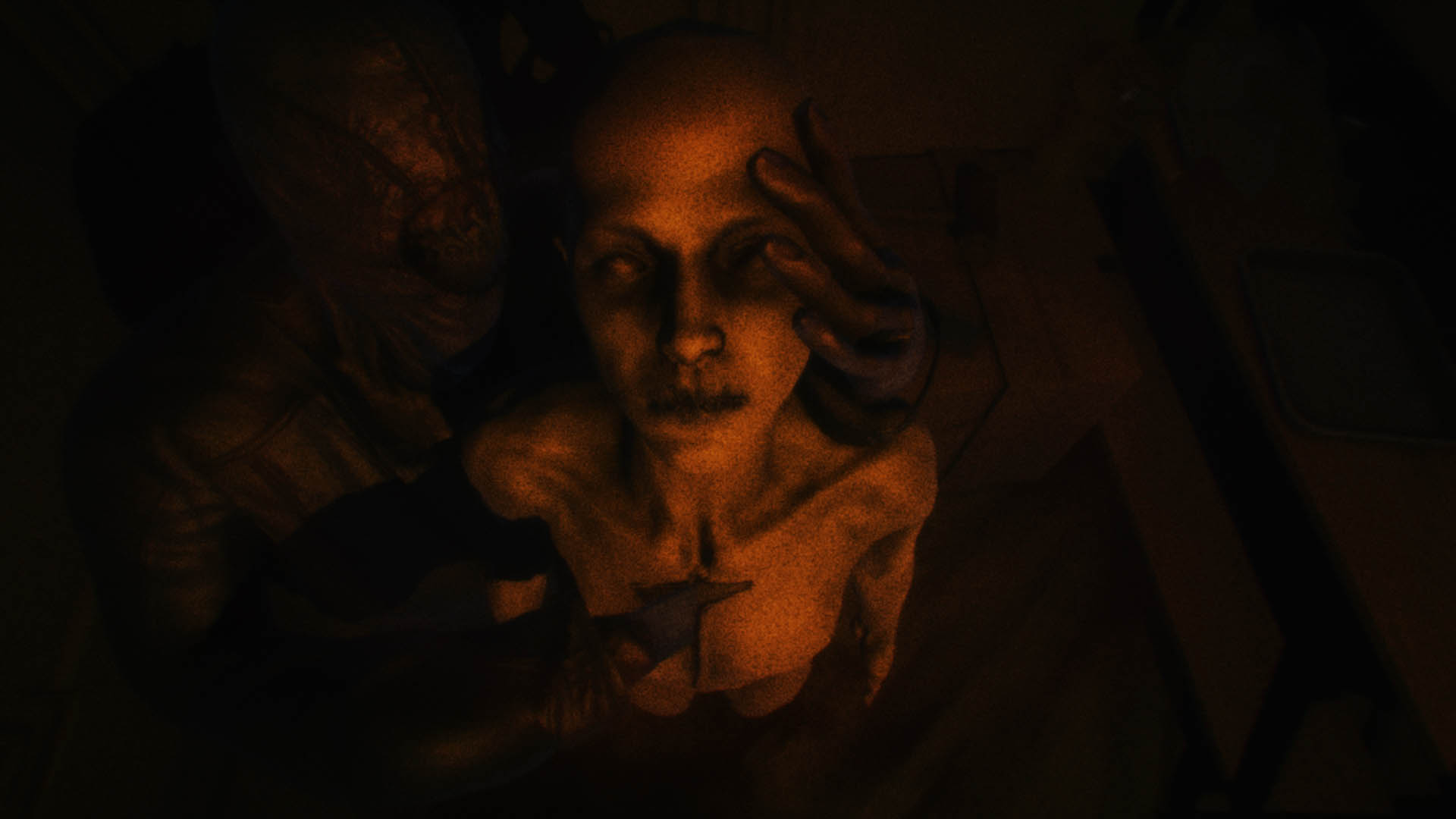 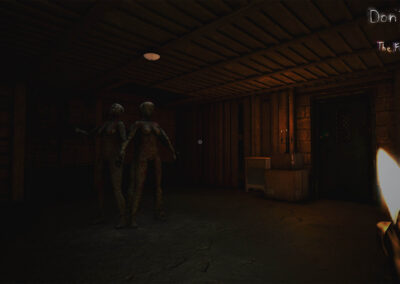 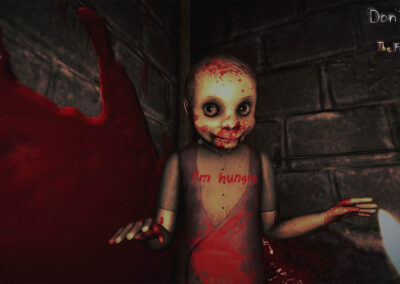 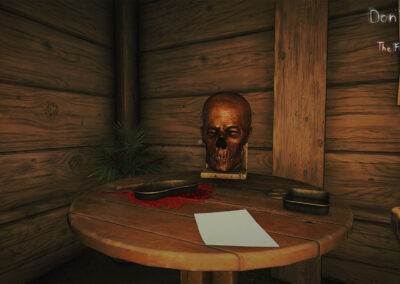 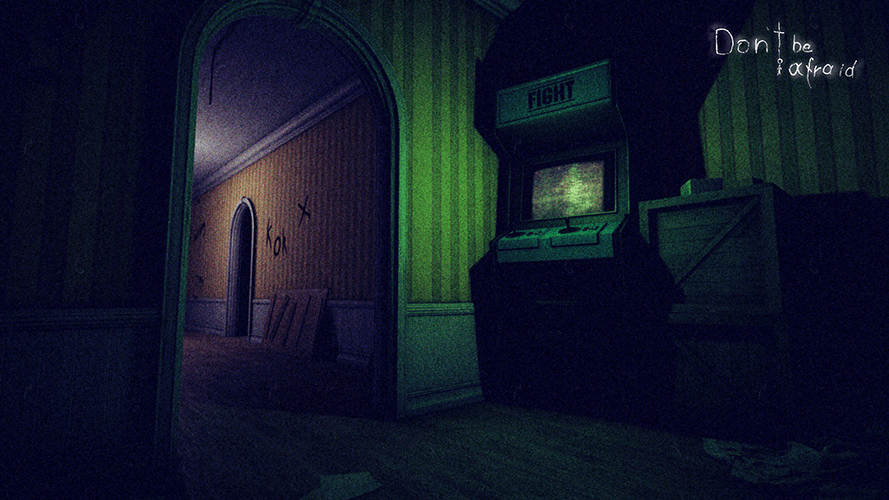 “I can’t really think of any other game where the protagonist is a kid than Among The Sleep in the first person genre. The major difference is that in that game you were in a nightmare; in this one it’s real terror you’re facing. You play as a child who’s been kidnapped by a psychopath. The First Toy contains two chapters or levels and it is meant to advertise the main game that is still being developed. A similar approach we had not long ago with Lust from Beyond where a standalone version titled Prologue was also released for the same purpose (and it was also free).

You can guess already that with a child you will not be wielding any weapons shooting left and right. In fact, you will need a candle as our hero is afraid of dark places. We do a lot of exploration and often return to the same spot – the main objective is to get the key that allows us to escape. I’ve always thought using mannequins as the means for several jumpscares is a great idea. There are notes scattered all around the levels explaining the back story but this is very barebone here – will probably be more exciting when we can put our hands on the final product.

Other than the mediocre voice acting this is a great little demo or teaser and the developers certainly got my attention.”

“I didn’t know what to expect when I started this game. At first, I was thoroughly grossed out by the dude mentally fapping over my character– which was a child. That was a bit much, but I think that the Dev’s intention was to make the player feel repulsed by the villain. Mission accomplished, I almost threw up in my mouth when he was talking to me.

The actual game was fun! I enjoyed the challenges and solving the puzzles. Then suddenly, it ended! I had no idea I was playing a demo. Fiddlesticks!

I’m excited to say that I am hungry for more. Not so much more of the gross pedo dude. But more puzzles and scares and exploration though this freaky building to try and escape.

The full game is slotted for an October release. Wishlist it! I’m sure it will be awesome. I look forward to leaving a positive review for that one as well. Well done, Broken Arrow Games, I hope you have a successful launch. :)”

“I just played 20 minutes of this game so far, 10 minutes i was taking courage to do something and the other 10 i was having a heart attack!”

“damn good demo, the full game could be really good if they keep up this quality”

“A nice short and free teaser to get an idea about what to come. If the final game has the same level and more of darkness and horror and not only the teasing then we should expect something horrific and terrifiing.

I like how the played and work with the child perspective although it appeared a little wierd at the beginning. And if closly listen to what the whispers in the darkness say and what its written on the papers we already get an idea of what to come. So all I want is to play the final game. Even if I need a new set of pants afterwards and maybe a visit in my hospital.”

“It’s a great start and has lots of potential. Really looking forward to the full game, it’ll be a good one i’m sure. It kinda feels like a modern day amnesia and that’s something to get excited about.”

“A really cool horror game, I hope the full release will be good too”

“If you like Layers of Fear or Lust For Darkness you will love Don’t Be Afraid. Such a great horror game. The concept is marvelous. You play as a child and you’ve been kidnapped by a psychopath and placed in a basement filled with puzzles. The game is dark, disturbing and has some awesome jump scares. It makes you super afraid to walk around, but you have to in order to advance. The mannequins are extra creepy too and will mess with your mind. I can’t wait for full game.”

I ♥♥♥♥ my ♥♥♥♥ing pants, this is a really scary game and I’m proud to say this, because most horror games aren’t even that scary to me. This game is honestly good for a free to play game.” 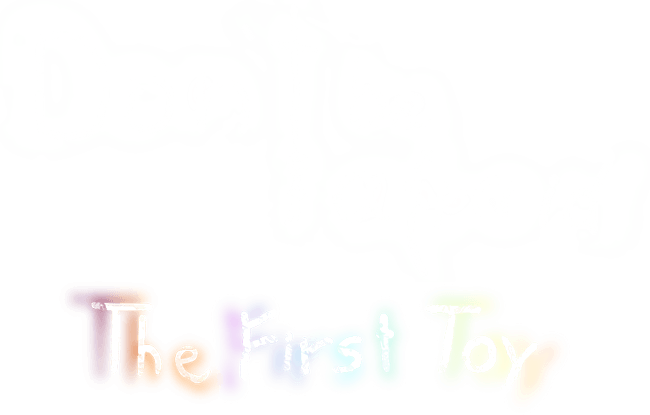 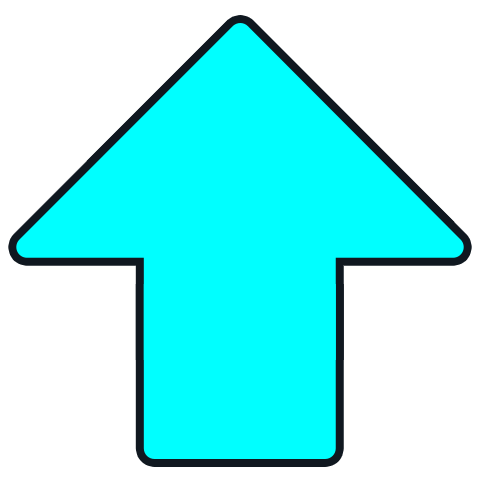